Ahhh, the Treasure Trove of Books! 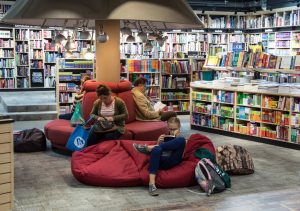 I recently polled some friends, coworkers, and family on their top 1-3 favorite or most influential books of 2017. Below are the results in no particular order. Some people added commentary. I took the liberty to edit the comments a little. I will go first.

VM: “Bonhoeffer: Pastor, Martyr, Prophet, Spy by Eric Metaxas. This book gives so much insight into Hitler’s Germany and what it was like to be a German during the WWII era. Learning Contentment by Nancy Wilson. And The Wahls Protocol by Terry Wahls, a great book on how diet can heal autoimmune diseases. Oh, and favorite fiction, The Nightingale by Kristin Hannah, about the French resistance when Germany occupied France in WW2 (and yes, I do have an obsession with this era!)”.

KM: “God at Work: Your Christian Vocation in All of Life by Gene Veith; Messy: The Power of Disorder to Transform Our Lives by Tim Harford; Bonhoeffer by Eric Metaxas”.

AB: “The Great Gatsby by F. Scott Fitzgerald; Unbroken by Laura Hillenbrand; and The Running Dream by Wendelin Van Draanen!”

KL: “Travels with Charley in Search of America by John Steinbeck. I’m into travel books this year, and this was the best one…he goes through several parts of the country in which I’ve lived and even though 55 years have passed since that book was published, I had almost the exact reaction to these places as he did. The book was great fun to read. Also, The Last Unicorn by Peter S Beagle, and Mao II by Don DeLillo, who takes me to places I feel I should be privy to”.

CM: “The Magic of Motherhood: The Good Stuff, the Hard Stuff, and Everything in Between by Ashley Gadd and Coffee & Crumbs”.

BA: “The Way of the Dragon or the Way of the Lamb by Jamin Goggin and Kyle Strobel; The Road Trip that Changed the World by Mark Sayers; What the Dog Saw by Malcolm Gladwell”.

HC: “ I Know This Much is True by Wally Lamb, a great fiction book! Fervent by Priscilla Shirer, a power Christian book written by the actress who starred in the movie War Room. Rising Strong by Brene Brown, about embracing inevitable failures and rising above them”.

CS:  “I read Moby Dick this year and found it to be challenging, yet fascinating. It is full if adventure, faith, whaling. Another book is the Diary of St. Maria Faustina. (Recommended by a priest). In her own words she writes about her intimacy with Jesus. He speaks to her revealing the importance of Divine Mercy. Another book was written by one of my most favorite authors, Larry McMurtry. Boone’s Lick was a fun novel set in 19th century western; same author as Lonesome Dove, which I cherish as an old friend”.

JH: “Sleeping Beauties by Stephen King and Owen King; The Secret History of Wonder Woman by Jill Lepore; and Playing with Fire: The 1968 Election and Transformation of American Politics by Lawrence O’Donnell”.

VM: “E-Myth Revisited: Why Most Small Businesses Don’t Work and What to Do About It by Michael Gerber”.

HH: “For the Glory the Untold and Inspiring Story of Eric Liddell, Hero of Chariots of Fire by Duncan Hamilton…story of Eric Liddell…not the glorified movie version…but real life. John Calvin and His Passion for the Majesty of God by John Piper…real easy read…a very short overview of his life and ministry”.

RM: “To Kill A Mockingbird by Harper Lee; 1984 by George Orwell; Rejection Proof: How I Beat Fear and Became Invincible Through 100 Days of Rejection by Jia Jiang”.

SA: “My Name is Hope by John Mark Comer”.

AM: “Miyamoto Musashi – His Life and His Writings by Kenji Tokitsu;  The 33 Strategies of War by Robert Greene; and The Toyota Kata Practice Guide: Practicing Scientific Thinking Skills for Superior Results in 20 Minutes a Day by Mike Rother”.

RH: The Nightingale by Kristin Hannah, about a French girl who help downed pilots during WW2; and Red Platoon: A True Story of American Valor by Clinton Romesha about brave soldiers in a terrible situation in Afghanistan.

GH: Exodus: Saved for God’s Glory by Philip Graham Ryken; The Baseball Whisperer: A Small-Town Coach Who Shaped Big League Dreams by Michael Tackett; The Emerald Mile: The Epic Story of the Fastest Ride in History Through the Heart of the Grand Canyon by Kevin Fedarko; and Blitzed: Drugs in the Third Reich by Norman Osler.

GH:(uh-oh, different GH than the one above) Orphan Train by Christina Baker Kline; The Story of a New Name by Elena Ferrante (2nd in the Neapolitan Series, a great saga of female friendship taking place in Italy); Born a Crime: Stories from a South African Childhood by Trevor Noah, an incredible memoir; and Rebecca by DuMaurier, an old romantic suspense classic.

And many people also added that the Bible is an important part of their reading.  I do not want this to go without saying.

Anyway, I am hoping this has fired up new cravings for some black on white leafy stuff. It sure has for me! Ah, the printed word, I love it. Maybe you will find your next treasure in one of the books listed above. Thanks to all of the contributors.

Also, check out the first 2 posts in the series:

Reading Challenge for 2018 – Part 1, which is the introduction; and

Reading Challenge for 2018 – Part 2, which is a printable list of 52 compelling categories to inspire diversity in reading and help you keep track of the books you read this year.

We are a participant in theAmazon Services LLC Associates Program, an affiliate advertising program designed to provide a means for us to earn fees by linking to Amazon.com and affiliated sites. Please know that you will not incur any extra charges.